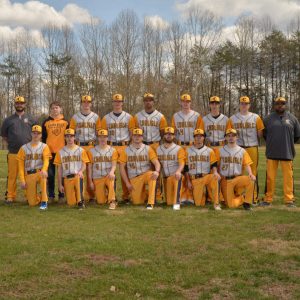 Carlisle School is open for in-person instruction five days a week, but outside guests are not permitted inside campus buildings due to the risk of COVID-19. In light of this, a virtual ceremony was held so that families, fellow students, and the media could still celebrate the significant day.

In a statement by Carlisle’s Athletic Director, Melinda Brightwell, she said, “One of the most exciting moments for a student-athlete is receiving a scholarship offer.  It has taken our two athletes here today years of hard work and commitment to get to this moment.  Created by the Collegiate Commissioners Association, the National Letter of Intent is the next step in their baseball careers.”

At the beginning of the event, Coach Will Inman shared a short video clip highlighting enhancements made in the past year to the newly renamed Leisy-Muehleck Baseball Field at the Dick Hensley Athletic Complex on Carlisle’s Campus.

He then introduced the two athletes who signed. Addison Clark is a five-year starter on the varsity team who plays corner outfield and infield. In 2018 he was named to the Second Team All-Conference and All-Tournament team and received the Coaches Award. In 2019 he was named to First Team All-State, First Team All-Conference, and received the Coaches Award. Coach Inman stated, “Addison has been an extreme part of this program. He has been a staple on this team and in this program since his 8th-grade year. It has been a great joy watching him grow as a player and a young man. He’s going to do great things in life because of his work ethic and mental toughness.”

According to Clark, “Without my past 5 years at Carlisle, I believe that there is no chance that I would be where I am today. I would personally like to thank Coach Inman and Coach Carter for pushing me to be the best baseball player and young man that I possibly could. I also want to thank Coach Inman and Coach Carter for sacrificing all of the time and putting forth their effort into Carlisle baseball to produce the best team they could year after year that continues to compete.” He added, “I am very humbled and grateful to be given the opportunity to play Division I baseball at the next level at the Virginia Military Institute. VMI is a very special place, and my decision to go there is not only to be able to play collegiate baseball at the highest level possible but also an opportunity to be a part of something that will better myself for the rest of my life.”

Coach Inman said, “Garret has been a key piece in the Carlisle Baseball program for four years now. He wants to be in the game when everything is on the line. As a coach, you really love having a guy like him on your team. He has put in the work and has earned everything he has achieved.”

When Kangas signed, he said, “I’m beyond excited to be continuing my education and baseball career at the Division 1 level. Four years ago, someone told me I would never play Division 1 baseball, and I think about that frequently. With the help of Coach Inman and Coach Carter, I was able to tremendously grow as a player. Carlisle has also prepared me academically for the challenges I may face ahead.” He added, “I chose Campbell because I love the brotherhood environment, the coaches, and the facilities. I felt like it was the best fit for me coming from a small school into college. I am forever thankful for Carlisle and the baseball program, and I hope to represent the school in the best way when I proceed to college.”

Following the signings and questions from regional media, Brightwell congratulated the two student-athletes saying, “I speak for many when I say we are looking forward to seeing these two young men on the Leisy-Muehleck Field this spring.”

The Carlisle School baseball team is led by Coach Will Inman who played nine and a half years of professional baseball for the Milwaukee Brewers, San Diego Padres, Boston Red Sox, and the Tampa Bay Rays before coming to Carlisle School in 2017.

Carlisle is currently accepting enrollment applications for the spring semester, and new families can learn more about joining the Carlisle Family at CarlisleSchool.org/tour.

Carlisle School is an independent college preparatory school that provides a positive, safe environment for academic excellence and character development while embracing diversity and preparing our students to become leaders as citizens in a global society.