Carlisle Participates in Hour of Code 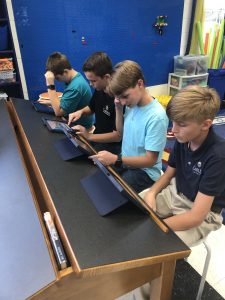 December 9-15 is Computer Science Education Week, and students at Carlisle School are celebrating by taking part in the Hour of Code, a global effort to celebrate computer science. Over 100 industry partners have joined together to support the Hour of Code movement, which aims to improve diversity in computer science and inspire students to learn about coding.

Computers are everywhere, changing every industry on the planet. But according to Code.org, only 45% of all high schools teach computer science. That’s why Carlisle School is joining in on the largest learning event in history: the Hour of Code. Throughout the week, students at Carlisle will have the opportunity to create code. Sherry Moschler, Carlisle School’s STEAM Coordinator, explained that coding is what makes it possible for us to create computer software, apps, and websites. She added that codes are also used in many objects we use daily, including our cell phones, washing machines, and vehicles.

Students in Carlisle’s STEAM classes are using apps on iPads to write code. The various apps guide students through a series of fun problem-solving activities to help them write code, a series of computer instructions for each specific task. Coding is an integral part of the year-long STEAM curriculum but this week students also have access to hundreds of additional interactive games available to schools for free by Code.org. 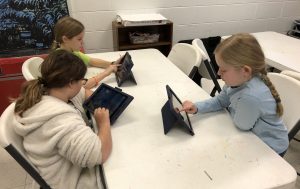 Caselyn Alderman, Eleanor Favero, and Charlotte Burdine practice coding skills on an iPad app during the Hour of Code at Carlisle.

Fifth-grader Caselyn Alderman enjoys coding because “I want to work for Apple when I am older and try to make phones, so my favorite part [of coding] is learning about the electrical part. You have to simplify instructions down to code because it’s not like humans; they [computers] cannot understand unless you give the instructions step-by-step.”

In addition to hands-on coding lessons, students will also interact with guest speakers to discuss real-world applications of coding this week. Paul Moschler, a Carlisle parent and employee of Duke Energy, visited 5th-grade classes on Tuesday to explain how binary code is used in the production of clean energy. Mr. Moschler, who works at one of Duke’s Natural Gas Turbine plants, showed students a series of digital control panels he looks at each day on his laptop to monitor the plant. The panels show him and other employees which pumps are running, allow them to ensure that water levels are correct, and show that valves to fill and empty the tanks are opening and closing at the appropriate times. 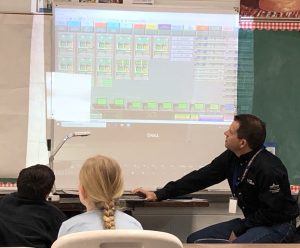 Paul Moschler of Duke Energy shows students a control panel for the plant and explains how he uses coding each day to help Duke produce clean energy.

Mr. Moschler explained the process of automation and how he uses logical coding or a series of “if-then statements” paired with data from the control panels to help the plant run smoothly. Students viewed a map of “Logic gates” or “and/or gates” he created using binary code to control whether a pump is on or off, or if a valve is open or closed, among other actions. Through the codes he writes, plant employees are instantly alerted to problematic conditions such as a failed valve or water levels in tanks being too high or low. He explained that employees can take manual control of the processes whenever a change is needed but that the creation of the algorithms to automate the plant ensures consistency and safety.

Fifth-grade student Anderson Haymore said, “ I liked how he [Mr. Moschler] showed us examples of his job and the system and how it works.” Classmate Layton Thomas added, “I thought his control panel was very cool, especially how someone was able to code ‘this’ and ‘that’ in order to control the entire power plant.” Thomas also aspires to attain a career in coding. He said, “ever since I started playing video games and watching videos on YouTube about game creation, I’ve often been fascinated by how they are made, so when coding came to our school, I was really excited to participate.” 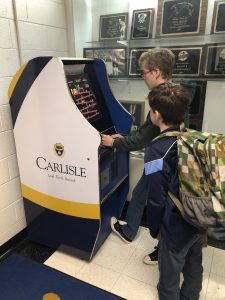 Gabriel Gonzalez plays a video game created with code in the middle school lobby while Will Kirby watches.

In addition to learning about coding in STEAM Lab, students in the middle school at Carlisle enjoy playing games on an arcade machine during their breaks between classes. The vintage games of Space Invaders, Pac-Man, and Centipede featured in the multi-game machine were all created with basic coding by students from our region. Head of School Gracie Agnew commented, “students gravitate to the arcade machine each day, it fascinates them and brings awareness to coding.” Jake Coles, an eighth-grade student who enjoys coding computer programs, said that coding is fun because “you get to control what is going on and there are not any limits to what you can code; you get to make it your own.”

Carlisle freshman Webb Garrett has not decided on his career path yet but is interested in the option of working in Information Technology. He said, “recently Carlisle has been introducing more and more coding programs. In the seventh and eighth grade, we had the opportunity to do coding whenever we want and now there’s also an exploratory in high school.”

Students in the Upper School recently completed an introductory Python 3 course under the direction of Christy Richardson and will begin learning C++ next semester. They are also working with Arduino, an open-source electronic prototyping platform that enables users to create interactive electronic objects. One of the students who completed the course is Jon Burkhart, a senior at Carlisle. He said, “I plan to continue to study Computer Sciences in college in order to pursue a career in video game Development and Visual Design.”

Chloe Taylor, a freshman at Carlisle is a member of NSBE, the National Association of Black Engineers, and she enjoys coding in her spare time. Taylor uses a building system at home called LittleBits to create code, and she is looking forward to taking the coding classes at Carlisle to learn more.

Recently named among the top 5,000 STEM High Schools in the nation by Newsweek, Carlisle School is dedicated to ensuring that students are prepared with the foundational skills for 21st-century success. STEAM stands for science, technology, engineering, art, and mathematics, and all students in Pre-K through 12th Grade have the opportunity to participate in STEAM classes. Carlisle School is currently enrolling students for the spring semester, and additional information on applying can be found online at CarlisleSchool.org or by calling Sandy Bailey at 276-632-7288 ext 242.

About Carlisle School:
Carlisle School is an independent college preparatory school that provides a positive, safe environment for academic excellence and character development while embracing diversity and preparing our students to become leaders as citizens in a global society. Additional information can be found at CarlisleSchool.org.

About Code.org:
Code.org is a 501c3 public non-profit dedicated to expanding participation in computer science and increasing participation by women and underrepresented students of color. Its vision is that every student in every school has the opportunity to learn computer programming. After launching in 2013, Code.org organized the Hour of Code campaign – which has introduced over 100 million students to computer science to date – and partnered with 70 public school districts nationwide to expand computer science programs. Code.org is supported by philanthropic donations from corporations, foundations and generous individuals, including Microsoft, Facebook, Infosys Foundation USA, Amazon, and others. For more information, please visit: code.org. 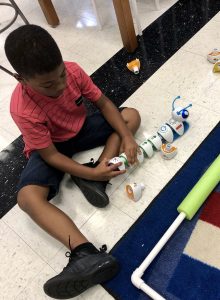 Ayden Butler provides simple coded instructions to a Code-a-pillar robot to direct it around obstacles. 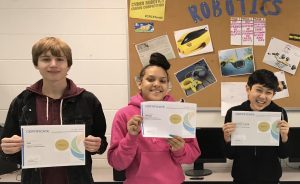 Jon Burkhart, Khaiya Howard-Hamilton, and Andrew Truong show certificates they earned after completing a course on Python 3. Not pictured is McKenzie Hauser and Mitchell Smith. 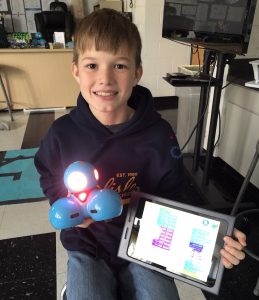 Hunter Doss shows coding that he wrote on an iPad to direct a Dash robot through an obstacle course.