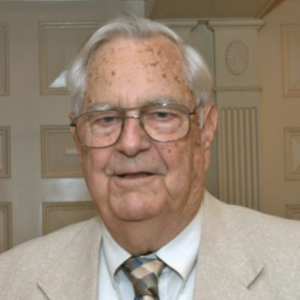 According to his daughter, Heidi Flythe, a class of 1981 alumna, “He strongly believed that smaller classes with very qualified teachers helped students learn better and helped prepare them for both college and lifetimes full of education.” She added, “That is why he and my mom made it a financial priority for all three of us kids to be educated at Carlisle from its inception to our three graduations.”

During his service to the school, Mr. Flythe participated in selecting five Heads of School, Ms. Roy, Mr. Cumiskey, Mr. Hensley, Mrs. Vipperman, and Mr. Ferguson. He loved Carlisle School and was involved in maintaining the buildings and grounds, and he also assisted with human resources needs.

Memorial Gifts – Thank you to the following donors who have given to Carlisle School in Mr. Flythe’s Memory.

The following obituary is from the Martinsville Bulletin.

He was born in Fieldale, Va., on January 7, 1930, to Virginia White and Simon Sutton Flythe. He graduated from Fieldale High School, where he played on the basketball team with lifelong friend Dr. John Ran Smith. The two friends went through Boy Scouts and, in 1945, became the first two Eagle Scouts in Fieldale. Buck was also awarded the Boy Scout’s Order of the Arrow.

He attended Duke University for a year before joining the Air Force during the Korean War. There he served as a First Lieutenant in the 64th Fighter-Interceptor Squadron stationed at Elmendorf Air Force Base in Anchorage, Alaska. During this time, he met his future wife, Helen Heidgerken, a flight attendant with Pacific Northern Airlines. Upon honorable discharge, he went on to graduate from Randolph Macon College, where he was a member of the Phi Kappa Sigma fraternity and pursued graduate studies at the University of Virginia.

Buck and Helen married at her home in Humboldt, Saskatchewan, Canada, in 1957. He then went to work for Texaco in Cumberland, Maryland, where his daughter, Carolyn, was later born in 1959. Soon after, the family moved to Martinsville, where Buck was employed by Walker Knitting of Bassett, Va., later to become Bassett-Walker Knitting Company. He eventually served as SVP of Administration for the company and retired after 29 years of service when Vanity Fair Corporation purchased it.

He was predeceased by his sister, Margaret “Peggy” Flythe Teague, and brother, Simon “Sutton” Flythe Jr.

Buck had a love for his community, most likely learned from his father. Like his father, he served on numerous community boards, including Patrick Henry Community College; the YMCA; The Red Cross; United Way; Safety Net; Martinsville Memorial Hospital; The Salvation Army; Chamber of Commerce; First National Bank of Bassett; Score; Bassett-Walker; and until recently was active in his favorite, the Blue Ridge Mountains Council of Scouting. Having actively served regionally for many years, Buck was awarded the Silver Beaver Award by the Boy Scouts of America for his distinguished service. Buck also helped found Carlisle School and served on its Board of Directors.

Buck and Helen were longstanding, active members of First Presbyterian Church of Martinsville, where Buck taught Sunday School and served in positions over the years as Deacon, Elder, and Trustee.

Buck took up many hobbies in retirement, including traveling the world with Helen, woodworking, gardening, painting, building, and even brick masonry. He designed the family’s vacation home in the Blue Ridge Mountains, where he loved to pass the time with family and friends.

A memorial service and celebration of his life will be held at First Presbyterian Church at a later date. Arrangements by McKee-Stone Funeral Home.

Share Your Memory:
We welcome members of the Carlisle Family to share memories and photos of Mr. Flythe. Please send submissions to development@carlisleschool.org.

In lieu of flowers, the family requests memorials made to any of the following: