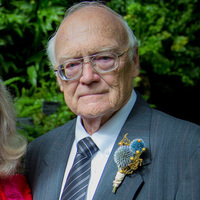 It is with deep sadness that we share news of the passing of Mr. Colin P. Ferguson, who served as Carlisle’s Headmaster from 1992-2004. He was Carlisle’s longest-serving Headmaster and is fondly remembered by many.

Mr. Ferguson is survived by his wife, Mary Alice Ferguson; five children; two daughters-in-law; one son-in-law; six grandchildren and one sister. His children are all Carlisle alumni: Janet ’88, Colin ’90, Dorrie ’96, Summer ’98, and Clifton ’02. Three of his grandchildren also attended and his wife and daughter-in-law both taught at Carlisle.

In this story, we will share photos from our school archives as well as memories from those he worked with at Carlisle. If you would like to contribute a memory to this collection, please email development@carlisleschool.org. 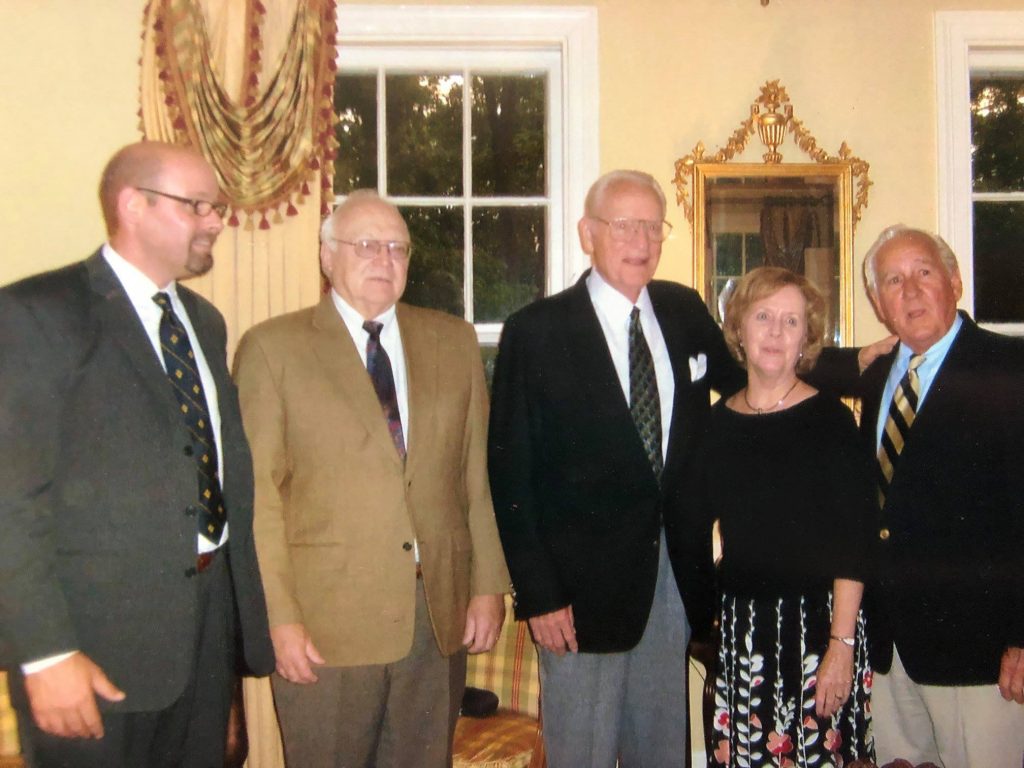 In his time at Carlisle, Mr. Ferguson helped the school celebrate its 25th anniversary and oversaw one of the most significant capital campaigns in Carlisle’s history. This campaign included the construction and opening of the Pannill-Walker Hall, the Frith Library, and the Lester Science-Technology Wing, which was added on to the Bassett-Morten Building.

Mr. Ferguson was instrumental in increasing the student body and expanding the diversity of students at Carlisle. He worked to establish both a formal admissions process and a financial aid program, which enabled families from a wide range of socioeconomic backgrounds to attain a Carlisle education. Anne Vipperman Madonia, who served as Lower School Director at the time and was also a Headmaster, explained that Mr. Ferguson’s efforts helped to triple the enrollment at Carlisle. 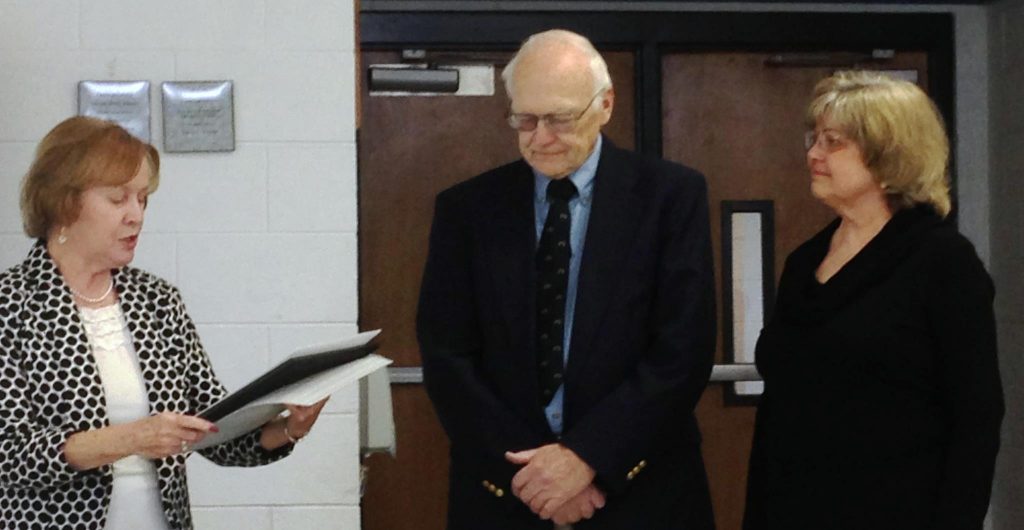 Anne Vipperman Madonia reads the board resolution to Colin and his wife, Mary Alice, declaring him Headmaster Emeritus. (Photo by Kim Adkins)

An educator at heart, Mr. Ferguson, was most proud of enhancing the Upper School curriculum which, according to former Advancement Director Kim Adkins, “put Carlisle on the map.” Launched by Mr. Ferguson and continued by those who followed in his footsteps, Carlisle’s rigorous education, helped students to become more academically competitive and stand out to colleges and universities.

To thank him for his service to the school, in May of 2013, Carlisle School’s Board of Trustees named Mr. Ferguson an Honorary Headmaster Emeritus.

“It is with great sadness that I read of the passing of Colin Ferguson. I have been a teacher for 30+ years and have had the opportunity to work with and for many different leaders. I can honestly say that Colin Ferguson was among the very best. He was a leader who believed that all children deserved the very best education possible and the time to develop their natural gifts. From day one, he dreamed of a first-class educational experience for every child who attended Carlisle, which included a rich and demanding arts program. More importantly, he enabled, challenged, and pushed those of us who he trusted to build this educational experience to have the freedom to make it a reality. I will forever be grateful for my years spent at Carlisle with Colin Ferguson and for the trust and support he gave me and the arts programs.” – Dr. Pamela Randall, Longwood University

“Colin Ferguson’s death is the loss of a good friend, an excellent academician, and an outstanding former head of school. Working closely with him for thirteen years at Carlisle School, I watched him move the school from a small independent school to a larger one with triple the number of students. Under his leadership, the fine arts program became well known for its productions and concerts, and he took both male and female sports to a new competitive level with many conference wins. Most impressive of all, he was an academician who understood curriculum, and as a result, academic offerings were expanded to become even more rigorous with a variety of more subjects. The Upper School International Baccalaureate Program was first studied for implementation under his leadership. Working with Colin as a fellow administrator, I can only say good things about him. In dealing with others, I found him always to be just and compassionate. He was a good listener and respected the opinions of others even if he disagreed. As head of Carlisle School he did an exemplary job of leading throughout his tenure. Colin was the epitome of the following quote: ‘He was a gentleman and a gentle man.’ ”
– Anne Vipperman Madonia, Parent, Former Headmaster, Former Faculty, Former Board President

“Such a wonderful person. I taught his grandkids and I loved hearing the stories about him taking them on dates.”
– Parker Knight ’01, Alum, Parent, and Former Faculty

“Colin was the first person I met at Carlisle School when he interviewed me for the Librarian position in August of 1995.  He was as warm and welcoming on that day as he was on the day he retired.  Colin had a way of listening to you so that you felt truly heard.  You may not have gotten what you were asking for, but you never doubted that you were heard.  Colin was also very involved in the lives of his children and his grandchildren.  His love for his family was evident in the care and attention that he paid to them.  He was a warm, kind, genuine person.”  – Tracy Guebert, Parent and Librarian

“He was one of the kindest, wisest men I ever knew. He was an educator, and children of all ages were his top priority. He was always there for me as a teacher; he would listen, support me when needed, give me advice when I asked. I watched him fight quietly but firmly for what he believed was the best for any given child. I loved him and will miss him. Jack remembers how excited the kindergarteners would get when they went to look for the gingerbread man in his office. I think Colin was just as excited to see them; he was never intimidating, even to the youngest child. Ainsley said he was ALWAYS there, sporting events at home or away, choir, band concerts, plays, she said you’d looked out there and see your parents and Mr. Ferguson! The children knew he always had their backs.” – Mary Lewis Johnston ’76, Alum, Parent, Former Faculty, and Current Board Member

“Colin was the Headmaster when I started to work at Carlisle in 1999. I remember that he always greeted you with a smile. He was such a nice and caring person.” -Beth Toms, Parent and Faculty

“Mr. Ferguson was a modest individual with many accolades. A great educator, mentor, and father. He would be ashamed of the state of that world today as he took a chance on my peers and me as we began the athletic dominance of Carlisle School. Condolences to Cliff, Dorrie, and Summer. Your DAD was definitely one of the good guys!”
– Jay Dee Draper, ’95 Alum

“Colin had the biggest heart and was so easy to talk to and to work with. He absolutely LOVED children and they gravitated to him like magnets. He loved his teachers and he was truly a champion for the children.”  -Robin Robertson, ’74, Alum and Faculty

“I will always be grateful to Colin for bringing me into the Carlisle fold in 1994.  He led the school in a way that truly embraced the idea of a Carlisle family and he created a warm, fun, and friendly work environment.  His was truly an open door policy.  No matter when you poked your head into his office, he would stop what he was doing and tell you to come on in.  You never left a conversation with Colin without feeling understood.  He was good-natured and kind and I’m lucky to have worked for him.” – Christina Tisdale, Parent and Guidance Counselor

“Mr. Ferguson was one of the kindest people I have known—just a completely warm and compassionate presence. And happy: whenever we would pass him in the hallways at school and ask how he was doing, his answer, pretty much without fail, was always, “Faaaan-tastic.” To this day, in my family, we still say “fantastic” that way. I remember coming home for visits during college and graduate school and talking with him about my uncertainties about what to do next with my life, and he always took the time to listen, and to offer encouragement and advice. Mr. Ferguson really listened to people, and he always looked for the best in them—and usually, he found it. Truly a good and open-hearted man.” – Lydia Gibson ’94 Alum

“Colin was Headmaster while our three children were students and my husband was on the board. He really made the school a special place. All the things people wrote about his kindness and love of children are so true. He will be missed by so many.” -Gael Marshall Chaney, Parent

“Colin supported our fledgling dance program 110%. So willing to do anything he could. I loved working for him and his open-minded and hopeful leadership.” – Candace Owen-Williams, Parent and Former Faculty

“Colin Ferguson was a wonderful head of school for Carlisle.  He was a strong supporter of the school and guided it during a major capital campaign.  He was a lifelong advocate for education who taught hundreds of students personally.  He was, I think, primarily an advocate and supporter of the students.  He knew every child in the school by name.  When he walked down the halls students came up to him, many little ones asking for a hug.  He was that kind of warm, caring person. Colin supported and cared for his faculty as well.  He always told us that our own families came first, even ahead of our Carlisle family.  Everyone who knew him understood what a loving, proud father and grandfather he was.  Speaking of how to work with young people he urged his Carlisle colleagues to remember that ‘All flowers don’t bloom at the same time.’  He taught by example.  He was a fine man.  It was a privilege to work for him.” – Linda Gibson, Parent and Faculty

“I am grateful to you all for sharing your memories of my Dad. It is healing to read them. To me, he was absolute perfection.”
– Summer Ferguson ’98, Alum 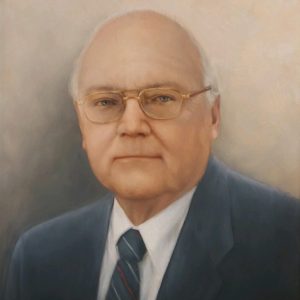 Mr. Ferguson’s Portrait which hangs in the Carlisle School Board Room. 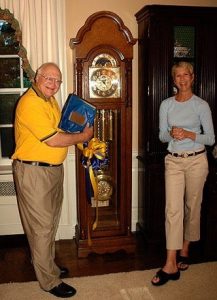 Former Board President Virginia Hamlet presents Mr. Ferguson with a Grandfather Clock for his retirement. 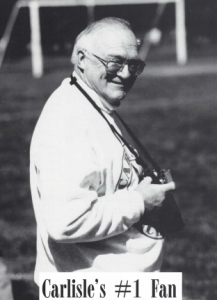 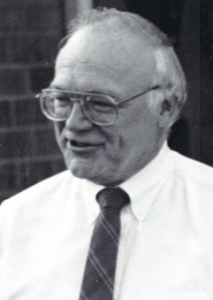 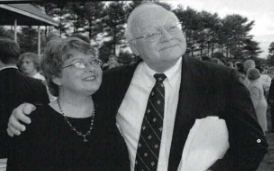 Mr. Ferguson with his wife Mary Alice at Commencement

This story is an evolving work, and we will continue to add more memories and photos as they are submitted. Please feel free to contribute to the collection by emailing development@carlisleschool.org.

Authors Note:
I have thoroughly enjoyed hearing all the wonderful stories about Mr. Ferguson and want to acknowledge those who collaborated to help us share his legacy. Thank you to Kim Adkins, Gracie Agnew, Melinda Brightwell, Tracy Guebert, Virginia Hamlet, Mary Lewis Johnston, Anne Vipperman Madonia, Rusti Riggs, Robin Robertson, Christina Tisdale, and all who have shared memories.